TL, DR. This paper tackles grasp planning which is the task of finding a gripper configuration (pose and width) that maximizes a success metric subject to kinematic and collision constraints. The suggested approach is to train a Grasp Quality Convolutional Neural Network (GQ-CNN) on a large synthetic dataset of depth images with associated positive and negative grasps. Then during test time, one can sample various grasps from a depth image, feed each through the GQ-CNN, pick the one with the highest probability of success, and execute the grasp open-loop.

Let’s start by introducing the variables that appear in the paper.

Goal. Ingest a depth image of an object in a scene with an associated grasp candidate , and spit out the probability that will succeed under the above uncertainties. This is equivalent to predicting the robustness of a grasp, defined as the expected value of conditioned on and , i.e. .

Solution. Use a neural network with weights to approximate the complex, high-dimensional function . Concretely,

And finally, using Monte-Carlo sampling of input-output pairs from our joint distribution, we obtain:

We can think of our joint as a generative model of images, grasps and success metrics. The relationship between the different variables is illustrated in the graphical model below. 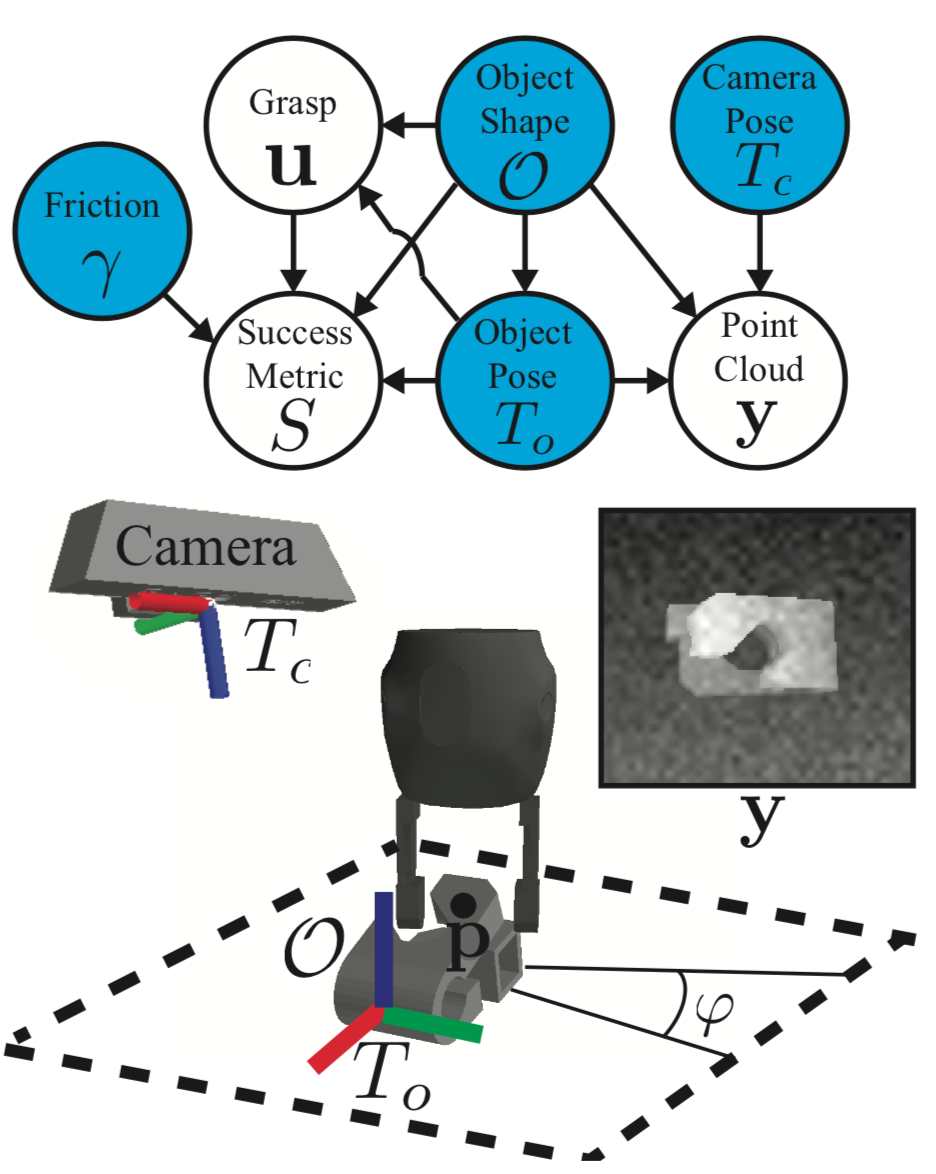 Using the chain rule, we can express the joint as the product of 4 terms: , , and . And since and are independent of (no arrow going from to or ), we can reduce the expression to

The state is represented by the blue nodes in the graphical model. Using the chain rule and independence properties, we can express its underlying distribution as the product of:

The grasp candidate model is a uniform distribution over pairs of antipodal contact points on the object surface whose grasp axis is parallel to the table plane (we want top-down grasps), the observation model is a rendered depth image of the scene corrupted with multiplicative and Gaussian Process noise, and the success model is a binary-valued reward function subject to 2 constraints: epsilon quality and collision freedom.

Now that we’ve examined the inner workings of our generative model , let’s see how we can use it to generate the massive Dex-Net dataset.

To train our GQ-CNN, we need to generate i.i.d samples, consisting of depth images, grasps, and grasp robustness labels, by sampling from the generative joint .

Once the synthetic dataset has been generated, it becomes trivial to train the network.

Overview of the Model

Note 1. The model is a typical deep learning architecture composed of convolutional, max-pool and fully-connected primitives.

Note 2. The depth alignment makes it easier for the model to train since it doesn’t have to worry about any rotational invariances. As for feeding the gripper depth to the model, I would think this is useful for pruning grasps that have the correct 2D position and orientation, but are too far away from the object (i.e. either not touching or barely touching).

Once the model is trained, we can pair the QG-CNN with a policy of choice. The one used in the paper is which amounts to sampling a set of predefined grasps from a depth image subject to a set of constraints (e.g. kinematic and collision constraints), scoring each grasp using the GQ-CNN, and finally executing the most robust grasp. There are two sampling strategies used to generate grasp candidates: antipodal grasp sampling and cross-entropy sampling.

First, we perform edge detection by locating pixel areas with high gradient magnitude. This is especially useful since graspable regions usually correspond to contact points on opposite edges of an object.

Then we sample pairs of pixels belonging to these areas to generate antipodal contact points on the object. We enforce the constraints that point pairs are parallel to the table plane.

We repeat this step until we reach the desired number of grasps, potentially increasing the friction coefficient if the amount is insufficient. In the final step, 2D grasps are deprojected to 3D grasps using the camera intrinsics and extrinsics and multiple grasps are obtained from the same contact points by discretizing the height starting from the object surface to the table surface ().

Evolution of grasp robustness as the gripper center sweeps the depth image from top to bottom.

Randomly choosing a grasp from a set of candidates doesn’t work very well in cases where the grasping regions are small and require very precise gripper configurations. Taking a look at the image above, we can see that as we sweep candidate grasps from top to bottom, grasp robustness stays near zero and spikes momentarily when we reach the good, yet narrow grasping area. Thus, uniform sampling of grasp candidates is inefficient especially since we’re trying to perform real-time grasp planning.

This is where importance sampling – one of my favorite techniques – can help! We can modify our sampling strategy such that at every iteration, we refit the candidate distribution to the grasps with the highest predicted robustness. The algorithm to perform this fitting is the cross-entropy method (CEM) which tries to minimize the cross-entropy between a mixture of gaussians and the top-k percentile of grasps ranked by GQ-CNN. The result is that at every iteration, we are more likely to sample grasps with high-robustness values (grasps in the spike area) and converge to an optimal grasp candidate. This fitting process is illustrated below.